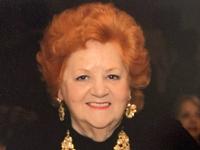 Barbara was born in Berea, Ohio and a greater Clevelander throughout her life. She was deeply religious and faith-filled and devoted to her mother and her family. She was a pioneer as a female executive from the 70’s through the late 90’s with retailers including Halle’s, May Company, Kauffman’s and O’Neill’s. Her latter career was focused on consulting and special events for nonprofits at Linear Creative and 11 years as the Executive Director of North Coast Men’s Chorus.

She offered leadership and service for over 30 years to many nonprofit organizations including Saint Joseph Academy, Providence House, North Coast Men’s Chorus, CPPA, Cleveland Police Foundation and Ohio Cancer Research, among others.

During her life, Barb touched thousands of people in her career and nonprofit causes with her dedication and love. In lieu of Flowers family requests memorial contributions to Providence House – Cleveland or North Coast Men’s Chorus. Mass of Christian Burial, St. Rocco Church - Cleveland, Wednesday November 6, 2019 at 10:30 AM. Interment Holy Cross Cemetery. Friends received Tuesday 3 – 8 PM at the A. RIPEPI AND SONS FUNERAL HOME, 18149 BAGLEY ROAD, MIDDLEBURG HEIGHTS, OH (West of I-71).